Howard Ellsworth Merryman was born on October 6, 1912 in
Steelton, PA. 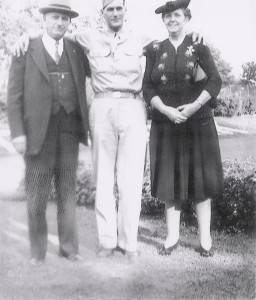 His parents where Howard M. & Florence Merryman.
He was raised up in Erie, PA.
Where he got married to
Grace G. Wurst on August 19,1934.
With her he got 1 daughter Barbara, and 2 son’s Alan & James.

Howard was drafted into the military on April 12, 1944. He received his basic training at Camp Swift,Texas. He was send overseas on October 12th, 1944. He was assigned to Army Corps of Engineers, 3rd platoon, Company A, 1252nd Combat Battalion. In February 1945 they where attached to General Patton’s 3rd Army. PFC Howard E. Merryman was killed in Winseler, Luxembourg on February 20, 1945.
Here is a letter his wife Grace got from a buddy, called Pfc. Freeman Lybarger in
August, 1945. Mr. Lybarger’s account:
“This patrol already had one man killed and one wounded separately
and were returning to the rear.  There was one place about three city
blocks from the town where the road turned sharply on the side of a
hill which was exposed to the machine gun fire from a pill box across
the river.
As the men made a fast run across this place, Howard was hit in the leg.
He stayed down on the road for about a minute and machine gun
bullets were tearing up the road like rain.  He saw that he had no chance
there so made a try for the ditch and protection when another
bullet hit him in the lower part of the spine and ranged upward and
out in front.  He died in a matter of a minute or two.  There was no pain as the shock had made him numb. That is my knowledge of how his death happened.” His Final interment was at Henri-Chapelle American Cemetery, Belgium in 1948 at
Plot F, Row 14, Grave 9.
He was awarded the Bronze Star and a Purple Heart.
His Grave is adopted by a local school Classes de 3eme et 4eme Primaire, Ecole de Montzen Gare. 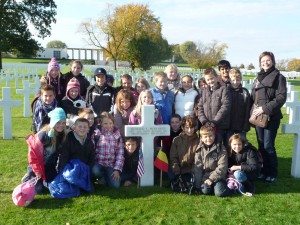 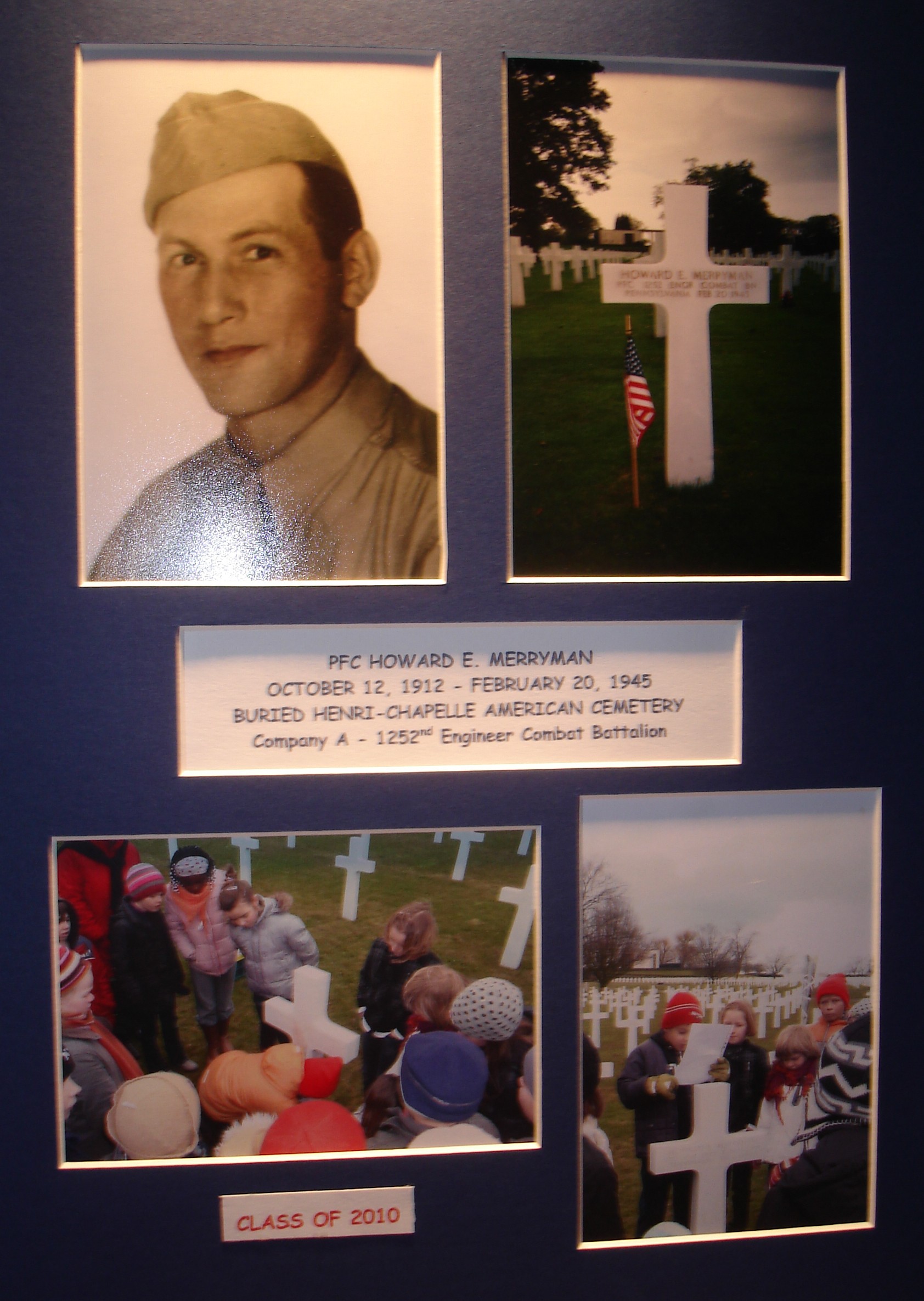 In 2010 Howard’s daughter Barbara and her husband, together with her daughter Sue and husband Chuck they visited his grave together with other
AWON (American WII Orphan Network) members.

He Wrote this article in Newsletter of The Star AWON:

Day 5 will  go down as one of the most powerful and memorable in my life. We are here in Liege, Belgium, with AWON.  They are here to visit the grave of their loved one on Memorial  Day. Quite frankly, I have always looked at Memorial Day as the unofficial beginning of summer and a day off  of  work. After today, no Memorial  Day will never be taken so lightly again.  NEVER. Sue’s  grandfather ,  PFC Howard Merryman, was killed  in Luxembourg on February 20, 1945, and is buried in Henri-Chapelle American Cemetery. His marker is our destination today.  Howard died when Barbara was eight years old. 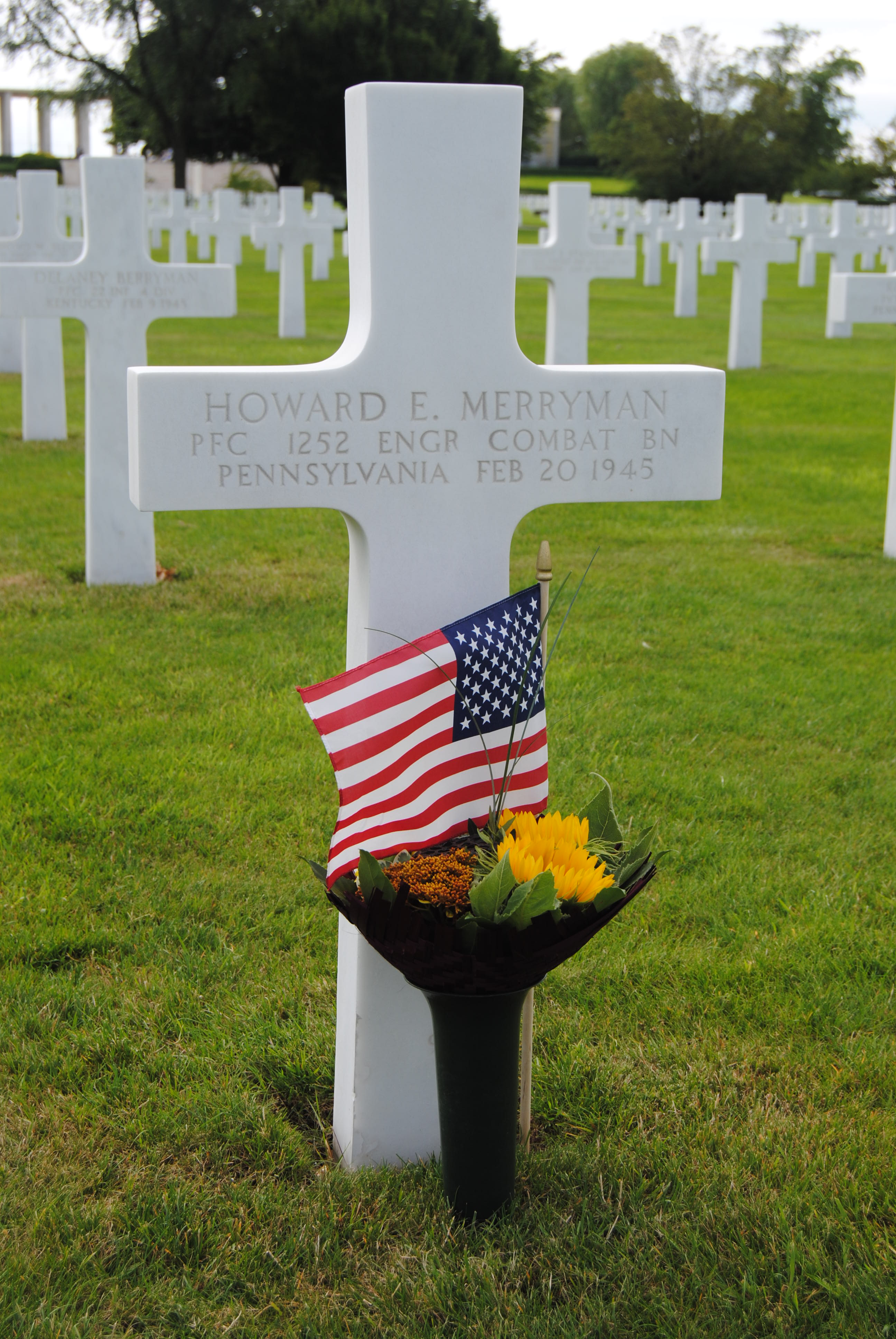 Today  she told me she was lucky to have known her father. I am sure there were many times in her life she didn’t feel so lucky. Howard is buried with 7,991 other soldiers. They were kids with their lives ahead of them, most of them 18 or 19 years old. Henri -Chapelle is in Hombourg, Belgium, about a 25-minute bus ride through beautiful country side. When we arrived you could see a well -manicured lawn and a colonnade of 24 pylons. When you walk through the pylons and look out over the lawn it is breathtaking. You are not sure whether to smile or cry, so you do both. We found PFC Merryman honored in spot F-9-12. His granite cross stood shoulder to shoulder with his comrades, but today he was with his daughter, son- in- law, granddaughter, and me. I did not feel worthy but I did feel honored and blessed. Today I saw the price of war in the crosses bearing the names of the fallen soldiers, and I saw the cost of war in Barbara’s tear’s. Day 6 somehow  topped Day 5. Today was the formal Memorial Day ceremony at Henri-Chapelle. We got to the cemetery early and had time to walk the grounds and spend some private time with each other. Somehow Sue found time to buy different colored roses and garnish to make  a bouquet for her mom.  She gave the flowers to her mom on behalf of each of the five kids: three pink roses representing the girls and two white ones representing the boys. Barbara clung to those flowers with the same passion and love she used to raise her children. When we got to the cemetery Barbara placed some flowers on a grave site for a friend. We decided to go back to Sue’s grandfather’s grave to get a few pictures before the ceremony started. As we approached the grave site we saw a man’s standing in front of Pfc. Merryman’s grave, and he appeared to be praying. We asked his name and he replied Hans Knobloch. When we told him that Barbara was Howard’s daughter and Sue was his granddaughter, Hans smiled. He didn’t know much English but he explained that he was praying for this man and this grave because he felt it was some thing he had  to do. He told us he woke up  today and  told his wife that he was  going to pray for “this man,” pointing to the name Howard Merryman on the grave stone.
He was a big man with a gentle nature who had driven 40 kilometers from his home in Germany to attend the Memorial Day ceremony at Henri-Chapelle. He chose this grave stone because of the flowers and said he wondered “where all the flowers had gone”-like the song. He sang a few bars for us in German with a big smile on his face. It was obvious even through our limited ability to communicate that he felt that all the graves in the cemetery deserved beautiful flowers like the display that was placed by Barbara at the base of her father’s granite cross heads tone. Hans stayed for a few minutes and tried to communicate his appreciation for Howard and all the Allied Armed Forces. It didn’t matter that he couldn’t   find the most eloquent English words; you could feel his admiration and appreciation. If   the character of a man is defined by his actions when no one is looking, Hans is a man of the highest character. He closed his eyes and prayed for a name on a granite  stone . . . alone on 57 acres of land that was once a battlefield before he was born. . .  and his only reason was to give thanks .  When he opened his eyes he saw that man’s daughter  and granddaughter and had a chance to share his feelings. It is God’s irony that on the site of such at rocity can rise such humanity. The ceremony started with dignitaries filing in and a helicopter landing, marking  the arrival of  someone important. Personally I have never been a big ceremony guy. To me, the  word  ceremony too many times takes a meaning of putting on a show to recognize a few while forgetting the many that supported the recognized  few. Today the ceremony recognized the many while a few humbly spoke, and regardless of their social stature the show was not about them. Now that is what a ceremony should be. Barbara was treated as one of the dignitaries. We were seat ed  in the third row over looking the cemetery and countless floral arrangements and  soldiers standing at attention holding flags. When I turned to see how many people were behind us I could not believe that there were thousands of people, both seated and standing. I have never been to a military cemetery and yet, here I was, in Belgium, and literally thousands of Europeans from many countries had come specifically to celebrate and pay tribute to U.S. soldiers. It is hard to describe but all of a sudden Hans wasn’t such an anomaly to me. He was representative of a lot of the people in this area, and that warms my heart. Yesterday was about the beauty of the cemetery and the fact that Sue was able  to share this experience  with he r  mom. Barbara got to introduce her  daughter to her grandfather posthumously. You could feel the peace and love. It was as if honor and duty met its debtor and the debt was forgiven. God dropped 7,992 pebbles in a pond and each one caused their own individual ripples . But over time they overlap, and today I was a spot on the latest ripple caused by PFC Howard Merryman on February 20, 1945. I am confident that over time the ripples go away and we are simply left  with a beautiful, quiet reflection pond.

Source: The Star-Issue 58-AWON “We Speak Their Names” September 2010 In 2010 I had the honor to meet Chuck and Sue in Orlando, Florida. 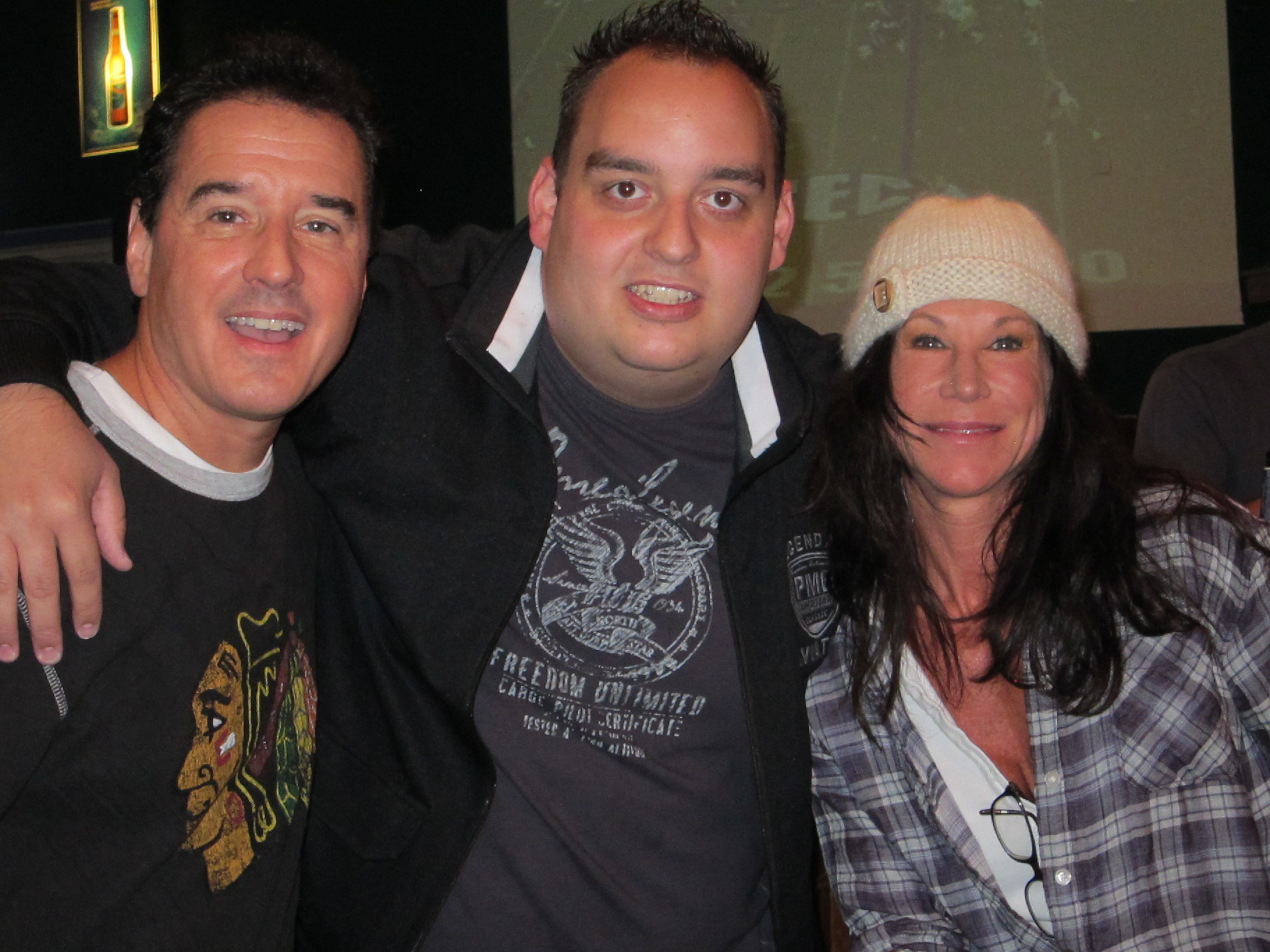 After 67 years we found an old friend of Howard Merryman.
His name is George R. Moore.
He served together with him in Camp Swift,Texas all the way trough the day he died in Luxembourg. His best buddy got shot in his leg and in his chest by machine gunfire. 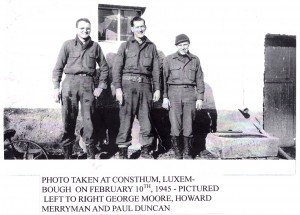 On the picture below you know can see George Moore now.
This picture is taken in Reading,PA.