These are Radio, TV, Magazine and  Newspapers Articles where I in. 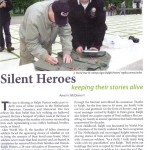 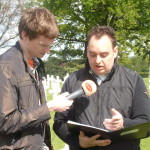 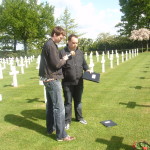 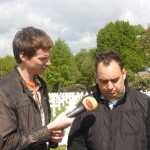 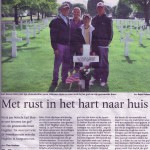 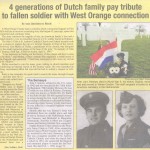 I had a Radio interview on
“HEART OF THE MATTER,”
with Kim Monson in 2016.
Here is the interview:

Dutch NPO Radio 1 This is a Radio Interview
I did on Dutch Memorial Day in the Netherlands on 4th of May  2009.
It’s spoken in Dutch.

I helped finding people who adopted a grave at
The Henri-Chapelle American Cemetery and Memorial.
Also I have a part in the documentary talking about my adoption soldiers at the Henri-Chapelle cemetery.

“ADOPTERS OF SOLDIERS’ GRAVES are citizens who choose one or more graves of American soldiers paying tribute to their LIBERATORS, as they are called. They choose to remember and never forget them for giving their lives in liberating their country.”

-The High Price of Freedom – PFC Harold B. McCarn

It took 18 months to complete the emotional journey to document
the supreme sacrifice of my cousin, PFC Harold B. McCarn.
Harold was a 22 year old rifleman Company “A”, the 60th Armored Infantry Battalion, 9th Armored Division
during World War II . His unit would engage the Nazis at the Battle of the Bugle, the Bridge at Remagen, and during the capture of the German autobahn. He was killed in action 16 March 1945, only 53 days short of Germany’s surrender.

During this very personal journey, I produced an HD documentary
– “The High Price of Freedom – PFC Harold B McCarn” for our future generations.

You can buy the dvd to go to this link:
http://www.jtweatherly.com/the-high-price-of-freedom/buy-the-dvd/