Crayton went to school at Eastern Illinois State Teacher’s College High School from
1929 to 1932, graduating in 1932. 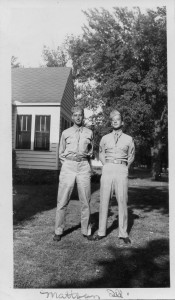 Crayton worked as a Railway Express Agent in Anderson, Indiana, and then in Mattoon, Illinois. The federal government’s Railway Express Agency was a precursor to package delivery companies like UPS, but it was railroad based instead of highway based. Clayton married Irma D. Heinlein and they lived in Mattoon, Illinois.
They had a son named Larry M. Heinlein, and a daughter named Linda R. Heinlein.

When Crayton was inducted into the Army, the family moved from Mattoon, Illinois to Cincinnati, Ohio to be near Irma’s parents for the duration of the war. Irma worked as a substitute teacher in the Cincinnati schools during 1944 and 1945. 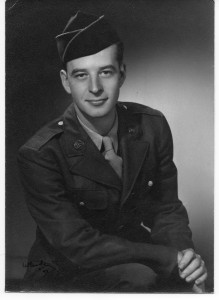 He was enlisted as a machine gunner to Company H, 39th Infantry Regiment, 9th Infantry Division.

Crayton fought  in France, Belgium and Germany. He loved to write V-mails to his wife and children. He was wounded in January, 1945, but returned to his Unit after only two weeks.
On March 18, 1945, he wrote a V-mail to his wife saying,
“Guess I love my family too, too much to be so far away.
I love you three- Mac & Daddy,”

That was it. He was killed in action that day.

Crayton died of  fragment wounds in his left arm and shoulder.
He died in a town called Kalenborn, Germany.
His oldest, Larry, was nine years old, and Linda was five years old when Mac was killed. 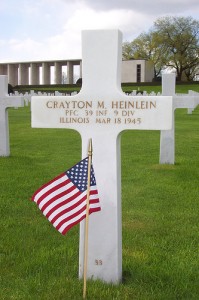 This story was written by his son, Larry M. Heinlein.

The next blog is from his nephew,
C. Scott Smith who wrote
this in 2006. He is the son of
Linda R. Heinlein who was the daughter of Crayton M. Heinlein.

The date on the grave is shown as March 18, 1945 and the site at the Henri-Chapelle military cemetery is, if my memory serves, on a long rolling hilltop in the middle of farmland in Belgium about an hour from Brussels.
I visited it once with my mother in 1967 after a harrowing taxi ride along single-lane farm roads from Brussels. The Grave belongs to my grandfather, Crayton Mack Heinlein, who was killed fighting the Germans in World War II.

Family lore, or at least that lore passed along by our often unreliable grandmother, tells us that Mack, as he was known to his friends and fellow soldiers in the 9th Infantry Division, was killed in action in the battle just before the Battle of the Bulge. This information would seem at odds with the date of death listed on his grave, since the Battle of the Bulge took place from December 16, 1944 to January 25, 1945 and Granddad was listed as having been killed in March.

I for one never really thought that knowing the correct date that he died was all that important. He was dead long before I was born and whether the date we were all told by Grandmom was the right one never really seemed to matter.

We do know, thanks to surviving letters from him, that Mack landed with his division at Normandy on D-Day plus 3 and fought across France, through the killing hedgerows of Normandy, and from there into Luxembourg and Belgium where, if Grandmother was to be believed, he died sometime before the Ardennes offensive which was launched by the Germans in their last gasp to fight their way to Antwerp and force a negotiated peace with the Allies. If the Army’s date is correct, he fought in the Battle of the Bulge before being killed.

He was almost too old to serve in the Army, having been called up at the age of 31, but he went without complaint. During the winter of 1944-45, one of the coldest on record in Europe, he lost part of both feet to frostbite (his first Purple Heart) but refused medical evacuation; once he had recovered, he rejoined his unit–where. during a short sharp firefight, he was credited with saving the life of his best friend. He was killed shortly thereafter (his second Purple Heart), the details of his death never really being made clear since no one from his original infantry platoon survived the war and the Army was confused as to the actual date and cause of his death.

I had not thought about his grave in years. and yet recently something caused me to recall that trip my mother and I took by taxi from Brussels all those years ago. We used to have a photograph that I took as an eight year-old of my mother kneeling next to her father’s grave, a young woman of 28 with tears rolling down her face and seeing her father’s grave for the very first time in her life. There was another photo that my mother took of me at that time and in it I’m standing at attention next to the grave attempting to look solemn.

Neither picture exists any longer and Mom died in 1987.

I don’t know why I started thinking about Granddad’s grave, but I did, and the thinking about it drew me to Google, that divinely inspired fount of all knowledge both useful and less than, and within about a minute I had located the web site for the American Battle Monuments Commission, and from them I was able to locate my grandfather in Belgium 61 years after his death and almost 40 years since my visit to his grave. The Battle Monuments Commission does an incredible job of maintaining the graves of our fallen soldiers. There are over 5,000 of them at Henri-Chapelle alone. If you have the name of the fallen you can easily find his or her grave, and if you request it, they will take photographs of the grave for you and return them via email or regular international mail within days of your request.

In order to make the inscription on the cross or Star of David stand out better in a photograph, the lettering is filled in with contrasting beach sand for the photo. The sand used can only come from Omaha Beach at Normandy (the site where over 2,000 American Gi’s fought and died on D-Day) because, as I was told by the superintendent of the cemetery, only sand from hallowed ground can be used to touch a grave marker that marks a hallowed site.

I was going to try to write something to finish this that might serve as a final statement and fitting tribute to the man my grandfather must have been. Upon reflection, I think that there can be no better statement about who he was, what he did and what the men and women with whom he served and died with accomplished for us all than this photograph.