John was born on October 27th, 1921 in Youngstown, Mahoning County, Ohio.
His father was John Joseph Costello Sr. His mother was Margaret Steinbaugh.
John had 2 brothers Roy F. Costello (who also was in the war) &
Thomas Costello and a sister Agnes Costello. 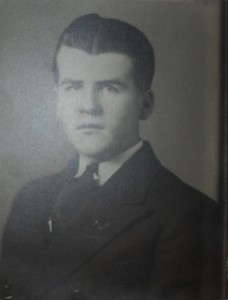 He attendend Westminister Maryland College, it was also a military training place.
John was enlisted on 07-08-1942 at Ft. Hayes Columbus Ohio.

He was assigned to the 335th infantry regiment, 84th infantry division. They where know as the Railspitters. He was in F-Company.
He was awarded the Bronze star and Purple heart.
He died on December 1st 1944. When his foxhole was hit by a mortar attack.
He was KIA between Beeck and Leiffarth, Germany.

His body was never recovered. He is listed on the Wall of the Missing.

His name on the Wall of the Missing, Margraten cemetery.