Franklin Monroe Cavender was born on the 14th of January, 1921.
In Quitman, Cleburne County, Arkansas.
His Father was Elyah Franklin Cavender,
and his Mother was Mrs Willie Etta Ussery Cavender.
He had two sisters: Mary Gladys (Lee) and Selma Irene Cavender. Franklin entered the active service on 5th of December, 1942. He served in
3rd Battalion, G-Company, 333rd Infantry Regiment, 84th Division.
The Division was known as the “Railsplitters”. 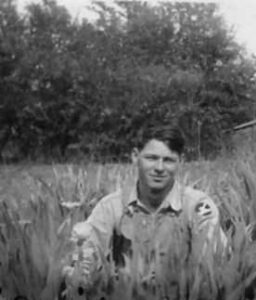 Franklin was married with Mary Leonore-Cavender just before he went to Europe. Mary became pregnant and together they had a daughter called: Mary L. Cavender. 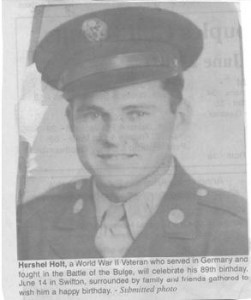 Franklin died on March 13th, 1945. His best buddy Hurshell Holt Told the story: ‘We came back from action and were about to take a shower at the coal mine complex in the German town.  We discussed who could go first. I told him go first and I went back to the front line and Franklin went for a shower. Then suddenly ‘screaming meemie’s’ exploded in front of the door and Franklin got hit by it.” 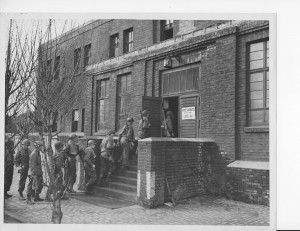 Example picture of G.I’s going to the shower at coal mine complex.

And is adopted by the Linssen Family. 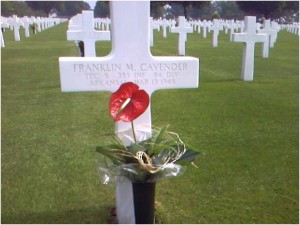 Thanks to the adoption family and also for ww2 veteran Hershell Holt for all the information.